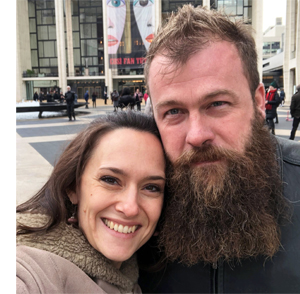 Be obedient
Building effective churches in Brazil and Pennsylvania, USA

You don’t need to be someone special or a high achiever to plant a church—just obedient. Before my wife, Chris, and I married or even participated in any mission outreaches, we sensed God telling us, “Reach people where you are.” So we did. I drove kids to youth functions and led a small youth cell group. I even met my wife through youth ministry.

After we were married one year, I had a dream. I saw a map of the world marked with red dots all over it, and sensed God saying, “You are going to touch these places in the world.” When I awoke, the vision seemed so vivid. I protested, “God, I don’t know any languages and I don’t have a burning desire for any one nation. . . . What am I to do?”

Chris and I joined a team for a two-week mission trip to Brazil, where we both developed a concern for Brazil and a desire to help that nation. We enrolled in the DOVE Leadership and Ministry School, and later, in a language study school in Brazil. We asked God where we should live. Within that year, we moved to the city of Fortaleza, rented a home, and began teaching the Bible in the Portuguese language. We invited a Brazilian team of young adults from YWAM to work with us for ten days. During those days, we showed the Jesus movie, held numerous sports events and built relationships with kids and young adults. The relationships built during those ten days became our core group. Within a few weeks, we had fifty to seventy-five kids in our home daily. Almost all of the youth came from single-parent homes. We opened our doors at 9 a.m. for the kids to hang out and play games and sports. We closed the doors at noon for an hour. Chris and I did not have any children of our own, so that made it easier to open our home. At times the kids annoyed us, things got broken, but we became family.

We began a Sunday evening service and started a small group. Although the parents encouraged their kids to attend, they were not interested in pursuing God for themselves. Today the church is multi-generational, but it took about seven years before adults attended. Many of the youth who participated in our youth ministry are living for God today and did not become involved in drugs like family members and the kids around them did.

We learned that commitment fluctuates greatly when working with first-generation Christians. We had months of solid attendance followed by months of dwindling attendance. In fact, we saw the numbers fluctuating between six and sixty. That is very frustrating, but people need to see you will be there for them. Time builds trust.

We asked God how we could affect our community and open doors to them. The area was full of drugs and violence. We became proactive, praying in streets, serving at soup kitchens and bringing people into a safe environment. We saw miracles—including soup multiplying as we prayed because more people than we had expected showed up for a free meal.

We returned to the USA after seven years in Brazil. I became involved in youth ministry and serve as the youth leader for DOVE USA.

About two years ago, Chris and I planted a house church in Lititz, Pennsylvania. To plant an effective church, we must look at the need and meet it, not build a church around our need or what we want it to be. Chris and I saw that discipleship is the most important thing needed in our new house church called The Gathering.

Discipleship is knowing what the Word of God says and doing it. Discipleship doesn’t normally happen during a preaching service. So we only have preaching every other week. On the alternate week, we break into discipleship groups. People can attend worship services and small groups every week and never be discipled or accountable to anyone. But having discipleship groups meet during the main service every other week, forces every person to be discipled. In these groups, we study the Biblical Foundational Series. We apply what we are learning and share what God is doing in our lives. We pray and encourage each other.

We find by breaking into small groups and praying for each other, God touches people. We see the strength in discipleship. It’s refreshing to see new Christians discovering with confidence that they are capable of discipling others.

The Gathering meets every Saturday night. People who are not connected with church come and accept Jesus. It’s been surprising to see how The Gathering is growing into a multi-generational church. When Chris and I first started the church, we expected it to be made up of mostly young adults. But now we have lots of children, young and old, poor and rich, and multi-ethnicity. It doesn’t matter the age or background, people desire community.

We want to create an environment that supports and allows transparency. People have a preconceived idea that church must be a certain way, but we believe that models and structures need to change if we are to reach people. Be real. People aren’t looking for perfect leaders—but authentic leaders.

Another main goal for our group is church planting. We talk about church planting a lot. We meet with young adults to teach them that they can do more than lead a small group—they can plant a church. We find many young adults are ready and willing to plant a church. As leaders, we train and release them. If we wait too long, we get in a rut and never do it. Our goal is to plant more churches.

In Brazil, Chris and I planted a church by ourselves. Although that church plant was successful and continues to grow, we would not plant alone again. We believe it is important to have a team. Those who are interested in planting a church should meet with interested people and get a game plan.

Chris and I are called to plant churches, but we aren’t going to recreate the same church over and over. Each church plant is different. One will become a micro church, another—a community church or mega church. The important thing is not structure, but whether discipleship is happening.