I recall a visit to Pilanesberg Park, a South African game preserve.  A few years earlier, the survival of the white rhinoceros in the game park had been threatened. Several of the endangered rhinos had been found slaughtered.

The game wardens tracked the remaining rhinos by placing video cameras in strategic locations to record any foul play. Video footage revealed young bull elephants harassing the rhinos without provocation. Teenaged elephants chased the white rhinos for long distances until they were exhausted, threw sticks at them and stomped them to death.

To remedy the situation, park officials killed five of the most aggressive young bull elephants and imported older bulls to influence for the remaining young males. The older bulls assumed their place among the herd as fathers and disciplinarians, and the young bulls learned quickly that they were no match for the more mature elephants. The former lawbreakers returned to normal patterns of elephant behavior, and even showed that they actually enjoyed their relationships with the older, more mature males.

The elephant story illustrates what younger Christians can gain if they have spiritual parents to help them by supporting, counseling and teaching them. The story also demonstrates what happens when seasoned Christians fail to act as spiritual parents. When mature Christians neglect to assume their responsibility to share their wisdom and love with younger Christians, the younger believers are not fully equipped for the task that lies ahead. They may be energetic and gifted, but without direction and loving oversight, they have a tendency to get off track—or even to trample those in their path.

Today, spiritually mature women and men are desperately needed to mentor younger believers, helping them to clarify what really matters in life and work. Spiritual parents who act as mature coaches can help young believers achieve their dreams and visions and feel connected as they integrate life and work and grow to maturity. 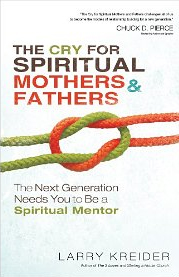 I am happy to announce that during the past year, I have taken everything I have written and learned about the important subject of spiritual fathering and mothering and combined it all into one new updated revised book to be released in March. The title: The Cry for Spiritual Mothers and Fathers—The Next Generation Needs You to be a Spiritual Mentor.  Discover that now is the time the Lord is turning the hearts of the fathers (and mothers) to their children and the hearts of the children to their fathers (and mothers), both naturally and spiritually (Malachi 4:6).