4. Look what God has done in Kenya 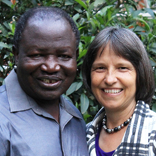 Look what God has done in Kenya
Ibrahim and Diane Omondi

When we held our first cell group in our home, we never envisioned that DOVE Africa would grow to about 200 congregations that reach into Kenya, Uganda, Rwanda and the Congo. By God’s grace, the church in Africa continues to grow as new congregations are added to our numbers every year.

In the beginning, getting to know neighbors in Nairobi was not easy; most people live life behind large gates or locked doors. But our little boys, aged 2 and 3 years at the time, had become friends with some neighbor children in the large field behind our house. That gave me a “right” to knock on the doors of their parents, and introduce myself as “Mama Michael” (Michael’s mom). We invited a few neighbors to a small group Bible study, and from there, DOVE was born.

In 1988, our living room hosted this first cell group. The members were churched—but not-yet-saved—neighbors who were open to hearing more about the Word of God. We met once a week to study the Bible, pray for each other and share a cup of tea. We tried diligently to follow up on those who attended by visiting them in their homes. That worked for two or three of the families, but a majority of them found polite ways to become too busy to even entertain our attempts to “reach” them.

After several months of meetings, with attendance wavering depending on the week, one of the ladies gave her life to Christ—a significant breakthrough. She immediately became a fervent evangelist. She invited her family members, her friends and her workmates to the cell group. Before long, our home was too small. We started a second, and then a third cell group, in nearby neighborhoods.

“Is this a church?” we were often asked in those early days. “Yes, we have a vision to become a church,” we always answered. We did not want to be accused later on of deceiving people or tricking them to be involved in something that was different from what was expected. Some of the first cell group participants were actually members of other churches, so we wanted to let them know what we were up to.

About one year later, we were asked to take another step. Those who had been attending felt that if we really wanted to be a church, we should start Sunday morning meetings. So we did. In a rented office space about two miles from our home, we had our first Sunday church service in 1989. Twenty-two people were present. We even had a Sunday school class for children and took an offering, which we had never done in the home cell group.

After another six months, the office was too small. We started meeting in a nearby school, and continued there until 2008 when DOVE acquired property in Nairobi and put up a tent as a place of meeting.

How did planting 200 congregations in Kenya, Uganda, Rwanda and the Congo happen? God orchestrated it in several different ways. From our midst, we started sending out church planters. Most of them have moved on to plant not only one church but to spearhead a church planting movement of their own.

Yes, many times it felt difficult to send out our “best.” But God the Father sent His one and only Son. Certainly we never have a right to complain. Even if we had tried, we could not have planned the amazing growth in DOVE Africa. God is sovereign and is using His people—in His own way—to expand the Kingdom.

We made an abundance of mistakes along the way. Looking back, we see the most obvious ones:

Our desire is not only to see new nations coming into the DOVE family of churches, but also to raise healthy leaders and healthy congregations. Together with the DOVE family around the world, we believe that our church family will grow to one thousand congregations by the year 2020. How will this happen?

The DOVE Kampala leadership team is already working on a strategy that will be adopted and carried out over Uganda. Kenya leaders will encourage regional strategies towards this goal. DOVE Nairobi, which has recently been training Great Commission evangelists with Kenya’s branch of Campus Crusade, will soon release some of those evangelists into church planting venues. We have identified three areas that could yield new congregations by mid-2015.

DOVE Africa is active in developing a strategy for raising church planters through leadership training and schools of evangelism. We want to identify new fields for church planting and carry out saturation prayer and evangelism in the identified areas.

We believe that the time is now for DOVE Africa pastors and evangelists to reach out into the harvest fields, bring in the harvest and release men and women of God, young and old alike, to plant new churches.

Read Chapter 5. From house to house in a multi-ethnic vibrant city here