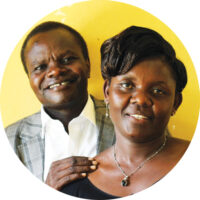 Hesbone and Violet Odindo provide oversight and direction for DOVE Kenya and also serve on the DOVE Africa Apostolic Council.

Hesbone has a passion to reach out with the holistic gospel, networking with like-minded organizations to see communities transformed. He has more than twenty years experience in church planting and in community outreaches in cross-cultural and racial settings. Born and raised in Kadawa, Kenya, Hesbone studied at universities in India, Kenya and the Netherlands. While studying in India, Hesbone led an international students’ fellowship in North India, and with other students founded a fellowship in Punjab University. He was also part of the students’ evangelistic movement in Punjab State, which planted four celebrations in Punjab at the height of the separatist war.

After graduating with a Master’s in Business Administration and Finance, Hesbone worked in hospital administration for fifteen years. In 1993, Hesbone became part of DOVE Nairobi where he met his wife-to-be Violet, who had been born in Kisumu, Kenya. Violet studied in Kenya universities and after graduation, worked as an accountant in the airline industry.

Hesbone served for several years as an elder in DOVE Nairobi and also an associate pastor under Ibrahim and Diane Omondi. He later resigned from his job to serve full time with DOVE Nairobi. Four years later in 2007, the Lord called the Odindos to plant a church in Hesbone’s original home village, Kadawa, in westen Kenya. By the grace of God, Restoration Community Church has expanded into eight celebrations. Read their church planting story here.

Like her husband, Violet is a gifted teacher of the word. She has a mercy ministry that operates a feeding program for forty-five children and ministers holistically to many widows. The Odindos are blessed with four children: Levi, Faith, LaVerne and Jadon.

The Odindos are so grateful to God to serve with the DOVE International family. Their prayer is that the God of more than enough will pour His grace upon them to serve for His glory.