A Church is Born

Our micro church, Shift, dates back to a time when I was discipling three young women nearly fifteen years ago. They wanted to learn more about how to read and study God’s Word. As we met together for Bible study and prayer, their lives began to change. These young ladies were so excited that they would bring their friends to the Bible studies, then their husbands. With more people attending and coming earlier for the weekly meetings, we introduced the idea of having a meal together as part of the evening events. Soon, Brian and I realized this was actually a micro church. We called this new church “Shift.”

While we were leading Shift, we also began to disciple several young couples who were preparing to get married. But this was more than pre-marital counseling; it was a walk of mentoring and discipleship. After several years of investing relationally into these unchurched couples, they came to us requesting that we start a church for them. So instead of inviting them to Shift, we began a new micro church with these couples who had recently given their lives fully to Christ. One of the couples in the new micro church offered their house for the micro church meetings. Instead of inviting new people into what is already in place at Shift, we decided to form a new “wineskin.” We find this strategy being used in Luke chapter 10. We were so glad that one of the new members opened their home, and the micro church Thrive is doing well. We are seeing Jesus’ mandate to “go and make disciples” as a biblical example of how micro churches can begin and multiply.

We understand that the heart of a micro church is relational, and believe it works best with twenty or less people. We have found that most participants prefer the smaller, more intimate settings. Keeping the groups smaller also works better logistically because it is often difficult to fit more than twenty people in one house comfortably. We have formed smaller groups for prayer and accountability within each micro church. This is a great way to ensure discipleship is taking place and to train future leaders.

Part of a Network

With other micro churches in the area also started by people in the DOVE family, Larry Kreider helped form a micro church network that is today called the House to House Micro Church Network. Our micro churches are part of this network. The network provides the registration with the government and spiritual and financial accountability for us and the other micro churches. We are grateful for the mentoring and spiritual oversight we receive from one of the couples on the network leadership team. This network leadership team, or apostolic council, meets monthly with the lead elders of all the micro churches, now over ten in the network, for prayer, accountability, and vision-casting.

We are trusting God for more micro churches to be birthed through this network. 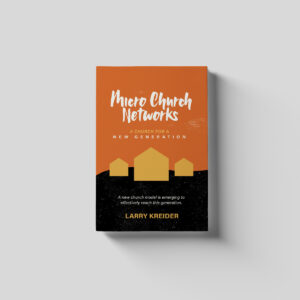 Learn more about micro churches in the book Micro Church Networks. Check it out here.

Kim and her husband, Brian, began their journey with micro churches in 2011. Their heart to “go and make disciples” has shaped how they plant and multiply micro churches. They also began City Gate Lancaster in 2007, which is a prayer ministry and mission center that focuses on prayer, serving the community, and training, now in four locations. Kim and Brian desire to train, empower, and release leaders, create healthy leaders, and allow the passion of God to transform individuals, cities, and nations.