We are so grateful to the Lord for the wise and faithful spiritual advisers the Lord has placed in our lives for accountability and for spiritual oversight. We meet together with them individually as needed at various times throughout the year, and we meet with them as a team each September for a day of discernment and prayer together.

Following is an introduction of our three spiritual advisers Keith Yoder and both Tony and Marilyn Fitzgerald, who are a married couple:

Keith Yoder, Ed.D., Educational Leadership, has served as professional educator, congregational and ministry leader. He is the founder of Teaching the Word Ministries. His personal mission is to help others identify their unique identity in Christ and empower them to fulfill their role in God’s Kingdom. He enjoys sharing God’s wisdom through mentoring, teaching, writing, and counseling leaders throughout the United States and worldwide in areas such as Africa, the Americas, India, and Myanmar. Keith ministers as an adviser to several networks of congregations and ministries, having served for fifteen years as leader of Regional Church of Lancaster County, a community of leaders cooperating to see the growth of God’s Kingdom in Lancaster County, Pennsylvania. In the middle portion of their fifth decade of marriage, Keith and Marian serve others from the overflow of their partnership. 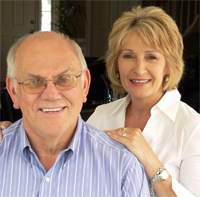 Tony and Marilyn Fitzgerald are founders and apostolic team leaders of Church of the Nations. COTN is an international family of apostolic clusters of churches and kingdom ministries related through love and commitment to see the kingdom of God established on earth. Brought up in Christian homes, in Tasmania, Australia, Tony and Marilyn’s lives took an unexpected turn. At 18, Tony was diagnosed with cancer. After months of hospitalization and recovery for Tony, the couple committed their lives completely to God’s purposes. They were married in 1970 and entered into denominational ministry training. In 1975, they moved to England and began a journey that has taken them to the four corners of the earth. In 1978 the Lord gave Tony the vision of resource bases serving networks of churches; and in 1979, the seed of what was to become COTN was planted. Today COTN has established kingdom influence in more than fifty countries. Tony and Marilyn see the church as a safe house, a covenant family of believers who are fathered, discipled and mentored to fulfill their kingdom destiny. “Church” only finds its true meaning in the context of the “gospel of the kingdom.”